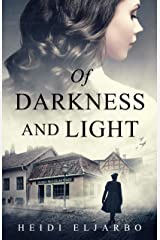 Of Darkness and Light

When art shop cleaner Mrs Gundersen is found dead in center of Oslo 1944, art historian Soli Hansen finds herself in the middle of a murder investigation of a person who was not who she seemed. Soli goes on a mission to prevent priceless Norwegian art from ending up in the hands of Hitler. With the Germans on her tail, she goes on a secret trip out of Oslo.

When asked by author Heidi Eljarbo to review Of Darkness and Light, the first installment in A Soli Hansen Mystery series, I was absolutely thrilled for the opportunity. She is a new to me author and Of Darkness and Light seemed seriously interesting to me as well as right up my alley. Of Darkness and Light is about art historian Solveig, Soli, Hansen who experiences a murder in the art shop where she works. Investigations show the murder is connected to the arrests and deportations of Jews out of Oslo. The Germans are in the process of stealing valuable pieces of art from their homes and taking them back to Germany. To prevent this Soli puts herself in danger to keep a priceless painting hidden from Hitler’s representatives in Oslo.

Main character Solveig Hansen, has managed to earn an art history degree, which I find impressive for a woman in Norway in the 1940s. It was nice to see she became more mature as the story progressed. She was easily my favorite as she could be both assertive and bold when called for.

Secondary character Lieutenant Colonel Heinz Walter is searching for valuable Norwegian art on behalf of Hitler. He is a cold and hard character who doesn't shy away from the occasional murder when trying to steal the best pieces of art for Hitler. He is my least favorite character as he is both ruthless and very dangerous.

Without revealing anything about the plot, I really appreciated how the dual timeline element added a deeper dimension to the story. The part from the 1600s Valetta was a favorite of mine, as I felt it was particularly well written. The research was excellent, which made me feel I learned more Norwegian wartime history. It was easy to feel pulled into the story as the writing was so vivid including descriptions included food rationing, German uniforms and weather conditions of autumn in Oslo among lots of other things.

Readers of historical fiction would love this work. Those of you who like WWII fiction will particularly enjoy Of Darkness and Light. Fans of Heidi Eljarbo’s previous books are sure to love this one. Similar books to explore might be Kate Morton’s and Lucinda Riley’s works.

Thank you to author Heidi Eljarbo for this eARC, which gave me the opportunity to share my honest review of Of Darkness and Light. All opinions are completely my own.
My rating: 5 stars / 5
Main reasons: excellent plot and great research