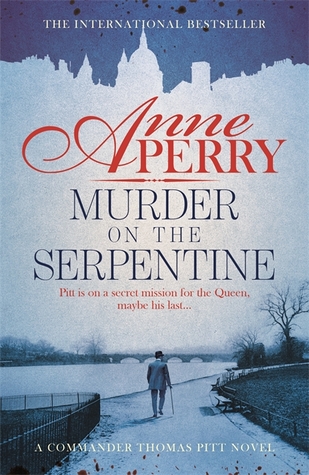 Murder on the Serpentine

About The Book (from publishers)
Pitt is on a secret mission for Queen Victoria, which may be his last…

London, 1899: Head of Special Branch Commander Thomas Pitt is summoned to Buckingham Palace.
In the twilight of her years, Queen Victoria is all too aware that the Prince of Wales will soon inherit her empire and must be beyond reproach. She tells Pitt she tasked her close friend and confidante, John Halberd, with investigating the Prince’s friends, specifically Alan Kendrick, a wealthy playboy and betting man, but before he could report back, Halberd was found dead in a rowing boat on the Serpentine.

The death has been ruled an unfortunate accident and the investigation closed, but the Queen is not convinced that all is as it seems and tasks Pitt with finding the truth.

Forced to act alone in this most sensitive of investigations, Pitt finds himself embroiled in a plot that threatens not only the reputations of men, but also the safety and reputation of the Empire…