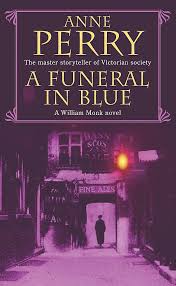 A Funeral in Blue

When two women are found brutally murdered in an artist’s apartment, private detective William Monk and his wife Hester team up with well connected and wealthy Lady Callandra Daviot to find out what happened to them. It seems very hard to know who the intended victim was and who just was at the wrong place at the wrong time. One is an artist’s model and the other doctor’s wife Elissa Beck. Elissa Beck’s husband is very soon charged with the murder of the two women. He is Hester Monk’s colleague and friend. She believes him innocent, so she desperately wants to help clear his name. As Hester and William investigate, secrets start to unravel relating to the victims’ pasts. As the Becks used to passionately battle for reform in the Austrian Revolution of 1848, it becomes vital for William to travel to Vienna to gather additional information about the Beck’s role in the Vienna Uprising.

Main Characters
Hester Monk is an ex Crimean War nurse who now volunteers at a hospital. She is married to William Monk who investigates cases privately as he has resigned from the police force under a bit of a cloud. They enjoy a close and happy marriage and are able to read each other very precisely, which is both a blessing and a curse while investigating this case. Hester is friends with both hospital surgeon dr Beck and member of the hospital board Lady Callandra Daviot. William feels he has to tread very carefully to protect his wife’s feelings when he discovers potentially hurtful facts. I enjoy the considerations of both William and Hester when they try to keep each other safe from emotional hurt throughout the investigation.

Lady Callandra Daviot is a wealthy widow and a member of the hospital board. She tries to keep a secret that she loves surgeon Kristian Beck. She officially takes an interest in the doctor’s case and gets Head of the Board to approve her as the doctor’s employer. In reality, she tries to do everything she can to help him without being judged by society.

Elements I Enjoyed:
I so much enjoy the emotional care the Monk’s take when they investigate; both towards each other as well as towards other persons involved. They seem to experience a lot of fear as the investigation progresses and are constantly considering who to tell what and when. This makes me exited to know what happens next. I get to know the relationship between the characters while the plot develops and I feel invested in them. Descriptions of the characters being wet and cold while moving around London in the rain and fog add to the gloomy feel of the story. As does descriptions of dark and unheated rooms. It is expertly balanced out with tea breaks in cozy withdrawing rooms in front of fires, or the eating of hot stews in a warm kitchen. I like that Anne Perry creates a universe with a vast number of characters who make appearances in different stories. It’s like brief visits from old friends.

Overall Thoughts
The historical events description sets the plot at approximately1860. The story develops gradually through the first half. In the second half the plot seems to bounce around a little bit. New information comes to light and a major twist adds up to a quite surprising conclusion. I find there is a lot to enjoy in this work. Fans of Anne Perry would love this novel, and I think readers of crime fiction would too.