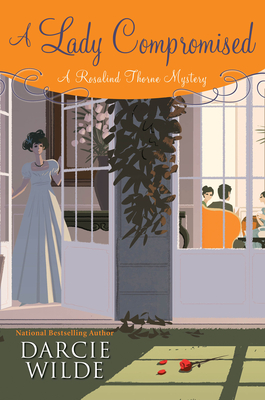 When Baronet’s daughter and amateur sleuth Rosalind Thorne is asked to investigate what appears to be a suicide, she finds nothing is as it seems. Among the upper crust of society she discovers motives for bad deeds fueled by financial greed and social ambition.

A Lady Compromised is book 4 in Rosalind Thorne Mysteries by Darcie Wild, published by Kensington Books. This is the very entertaining and intriguing story about amateur sleuth Rosalind Thorne as she is invited to help solve a mysterious case. The authorities have decided it was suicide, but the victim’s sister thinks he was shot as he was getting ready to duel. Rosalind’s investigation reveals a string of hidden secrets and cover-ups among upper class families. They consider themselves beyond reproach, which the investigation totally contradicts.

Main character is Baronet’s daughter and amateur sleuth Rosalind Thorne. Her family has fallen on hard times following her father’s forger activity. She tries to hide this while assisting friends in need using her investigation skills and connections. She travels to opulent English country estates not unlike Agatha Christie’s Poirot.

Dowager Lady Casselmaine is a well developed and interesting supporting character who seems to have chosen a reclusive life. Her character goes through a development process from rather standoffish into a more amiable person who tries to open herself up to the world and live a better life. For this reason she is my favorite of this story.

The fly-on-the-wall perspective of the upper class lifestyle I found thoroughly amusing. I can’t remember having read anything with similar detailed descriptions of how dinner parties might feel for guests. The characters came alive and felt both relatable and realistic in this setting. My favorite part was descriptions of the Dowager Countess’ journey and development through the story. I also loved following Rosalind’s somewhat complicated and interesting past with her host.

I didn’t know much beforehand about duels, which played an important role in the plot. I very much enjoyed the descriptions of the secrecy surrounding it. Bad attitudes against foreigners and a notion that some people have “superior genes” made the plot stand out, and added drama. I found this a unique, surprising element I have not read about before.

I read this as a standalone, which worked perfectly. The ending left me curious and opens up for the next book. While this is the first cozy mystery I have read by Darcie Wilde, I would very much like to start from the beginning and read the whole series.

Anyone who enjoys the affluent country environments reminiscent of Agatha Christie and Jane Austin would love this. Fans familiar with Darcie Wilde’s works would too.
Similar authors to explore might be Andrea Penrose and Rosemary Simpson.

Thank you to Kensington Books and NetGalley for this opportunity to share my honest review. All opinions are completely my own.

Conclusion: A Lady Compromised is the entertaining and intriguing new installment in Rosalind Thorne Mysteries series. Amateur sleuth Rosalind Thorne solves crimes in Jane Austin-like opulent English country environments. Somebody ends up dead in what appears to be a duel gone horribly wrong. Bad attitude against foreigners was a unique and surprising element adding drama to the story.