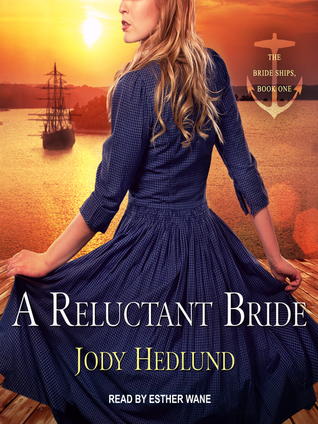 When offered the opportunity to escape hunger and poverty in London, care giver Mercy Wilkins agrees to join the first bride ship to British Columbia. On board she learns to assist wealthy and titled ships surgeon, Joseph Colville, in treatment of patients. They have to fight against their own feelings and society’s prejudice.

A Reluctant Bride is the first book in The Bride Ships series by Jody Hedlund, and I listened to an audio edition published by arrangement with Baker Publishing Group.
The plot is set in the poorest part of London 1862. We follow Mercy Wilkins as she tries to take care of her small siblings. Life seems a constant fight for survival, so when Mercy gets the opportunity to join the bride ship voyage to Vancouver Island, she accepts. On board she meets Baron of Wiltshire and ships surgeon Joseph Colville. Mercy learns to assist him in treatment of patients. They both fight against the mutual attraction they feel and know they come from different worlds, which makes a relationship between them unacceptable in the eyes of society.

Main character is child caregiver and nursing assistant Mercy Wilkins who thinks she is going to British Columbia to find employment. That she has to marry upon arrival has escaped her notice. I find her a very kind and impressive character who manages to care for others when she has so little herself. She is my favorite character of this story.

Supporting character Reverent William Richard Scott acts as chaperone for the brides on the trip. He is patronizing and demeaning, taking his position way too seriously. He was my least favorite of the story. His character will probably haunt me for a long time. I found the character development of this story fabulous.

The vivid description of evergreen trees, sandy beaches and wildlife on Vancouver Island, I found were fantastic in all 3 books. I thoroughly loved the entertaining writing style, dialogue and vibe which make this series one of my absolute favorites. I can’t wait for the release of installment #4.
My favorite part was the romance between Mercy and Joseph. During the voyage they live through hardship and become friends. The closeness increases.

The plot has a distinct spiritual element and Mercy and Joseph pray for help with processing their grief. Mercy has not felt God’s nearness in her struggle to survive in London’s slums. She tries to pray, but feels she is not quite able to. Joseph is running from God and his grief. Nothing seems to have meaning and he prays to God to show him the next step.
Fans of Jody Hedlund are sure to love A Reluctant Bride. Readers of historical romance fiction will enjoy it too. Similar authors to explore might be Julie Klassen or Elizabeth Camden. All opinions in this review are my own.
Conclusion: This is the first book in the captivating series about young English women going to British Columbia to help populate the colony. I thoroughly loved the entertaining writing style, dialogue and vibe which make this series one of my absolute favorites. I can’t wait for release of installment #4.
Rating: 5 stars / 5
Main reasons: exiting plot, vivid writing, fabulous characters