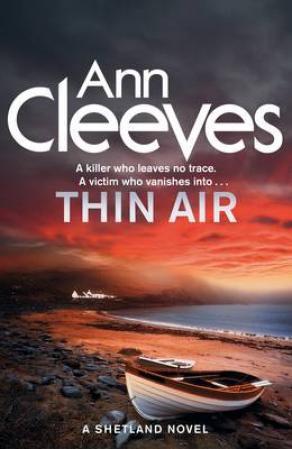 Thin Air is the next book in Ann Cleeves' Shetland series - which is now a major BBC One drama starring Douglas Henshall as detective Jimmy Perez. A group of old university friends leave the bright lights of London and travel to Unst, Shetland's most northerly island, to celebrate the marriage of one of their friends to a Shetlander. But late on the night of the wedding party, one of them, Eleanor, disappears - apparently into thin air. It's mid-summer, a time of light nights and unexpected mists. The following day, Eleanor's friend Polly receives an email. It appears to be a suicide note, saying she'll never be found alive. And then Eleanor's body is discovered, lying in a small loch close to the cliff edge. Detectives Jimmy Perez and Willow Reeves are dispatched to Unst to investigate. Before she went missing, Eleanor claimed to have seen the ghost of a local child who drowned in the 1920s. Her interest in the ghost had seemed unhealthy - obsessive, even - to her friends: an indication of a troubled mind. But Jimmy and Willow are convinced that there is more to Eleanor's death than they first thought. Is there a secret that lies behind the myth? One so shocking that someone would kill - many years later - to protect? Ann Cleeves' striking new Shetland novel explores the tensions between tradition and modernity that lie deep at the heart of a community, and how events from the past can have devastating effects on the present. Also available in the Shetland series are Raven Black, White Nights, Red Bones, Blue Lightning and Dead Water. Ann Cleeves' Vera Stanhope series series (ITV television drama VERA) contains six titles, of which Harbour Street is the most recent.