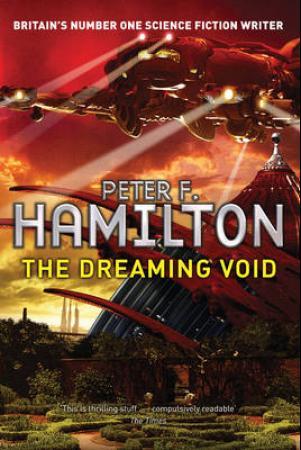 At the centre of the Intersolar Commonwealth universe is a massive black hole. This Void is not a natural artefact. Inside there is a strange universe where the laws of physics are very different to those we know. It is slowly consuming the other stars of the galactic core - one day it will have devoured the entire galaxy. It's AD 4000, and a human has started to dream of the wonderful existence of the Void. He has a following of millions of believers. They now wish to Pilgrimage to the Void to live the life they have been shown. Other starfaring species fear their migration will cause the Void to expand again. They are prepared to stop the Pilgrimage fleet no matter what the cost. The Pilgrimage begins...

It's AD 3580 and the Intersolar Commonwealth has spread throughout the galaxy. Its citizens are privileged and protected by a powerful navy. Yet at the centre of this galaxy is the Void, a sealed universe created by aliens billions of years ago. And the Void is far from inert. Its expansion has gradually been consuming nearby star systems -- now it's trying to make contact. The Void chooses Inigo as its conduit, and he channels dreams of a simpler life within its bounds. Disaffected humanity hungers for this vision, adopting him as their prophet. But Inigo disappears and his followers instigate a pilgrimage to take them into the Void itself. An act that could trigger its expansion and thereby damage our galaxy beyond repair. Meanwhile, within the Void, a junior constable called Edeard begins his journey to greatness. He takes on his corrupt city, giving his people hope. He also becomes the focus of Inigo's dream -- and thereby humanity's greatest hero. 'Mind-expanding ideas, deft plotting and a convincing depiction of political intrigue' Guardian