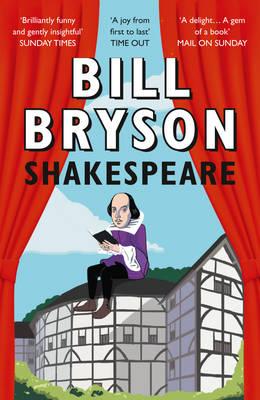 the world as a stage

This short biography of William Shakespeare by world famous writer Bill Bryson brims with the author's inimitable wit and intelligence. Shakespeare's life, despite the scrutiny of generations of biographers and scholars, is still a thicket of myths and traditions, some preposterous, some conflicting, arranged around the few scant facts known about the Bard, from his birth in Stratford to the bequest of his second best bed to his wife when he died. Following his international bestsellers 'A Short History of Nearly Everything' and 'The Life and Times of the Thunderbolt Kid', Bill Bryson has written a short biography of William Shakespeare for the Eminent Lives series, which seeks to pair great subjects with writers known for their strong sensibilities and sharp, lively points of view.

From bestselling author Bill Bryson comes this compelling short biography of William Shakespeare, our greatest dramatist and poet.Examining centuries of myths, half-truths and downright lies, Bill Bryson makes sense of the man behind the masterpieces. As he leads us through the crowded streets of Elizabethan England, he brings to life the places and characters that inspired Shakespeare's work. Along the way he delights in the inventiveness of Shakespeare's language, which has given us so many of the indispensable words and phrases we use today, and celebrates the Bard's legacy to our literature, culture and history.Drawing together information from a vast array of sources, this is a masterful account of the life and works of William Shakespeare, one of the most famous and most enigmatic people ever to have lived - not to mention a classic piece of Bill Bryson.