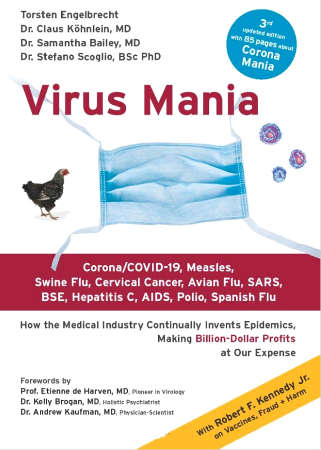 The existence, the pathogenicity and the deadly effects of
these agents have never been proven.
The book "Virus Mania" will also outline how modern medicine uses
indirect lab tools such as antibody tests and the polymerase chain
reaction (PCR) that are in fact worthless to detect viruses.

The alleged viruses may in fact, also be seen as particles produced
by the cells themselves as a consequence of certain stress factors
such as drugs.
These particles are then "picked up" by antibody and PCR tests and
mistakenly interpreted as epidemic-causing viruses.
That the public is misled about such things is also largely due to
the fact-free reporting of the media
(the coverage of the "New York Times" and "Der Spiegel" are
specifically analyzed).
The authors of "Virus Mania" analyze all real causes of the illnesses
named COVID-19, avian flu, AIDS or Spanish flu,
among them pharmaceuticals, lifestyle drugs, pesticides, heavy metals,
pollution, malnutrition and stress.
To substantiate it, they cite dozens of renowned scientists,
among them the Nobel laureates Kary Mullis, Barbara McClintock,
Walter Gilbert and Sir Frank Macfarlane Burnet
as well as microbiologist and Pulitzer Prize winner Ren Dubos,
and it presents more than 1,400 solid scientific references.

"People are dying from the covid 'vaccine', and those who are not,
are told to take 2 or 3 more shots."