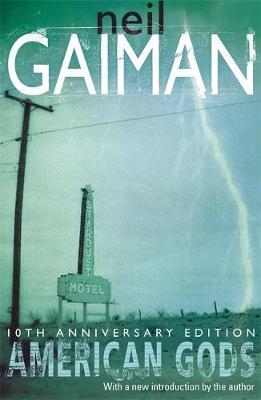 After three years in prison, Shadow has done his time. But as the time until his release ticks away, he can feel a storm brewing. Two days before he gets out, his wife Laura dies in a mysterious car crash, in adulterous circumstances. Dazed, Shadow travels home, only to encounter the bizarre Mr Wednesday claiming to be a refugee from a distant war, a former god and the king of America. Together they embark on a very strange journey across the States, along the way solving the murders which have occurred every winter in one small American town. But the storm is about to break...Disturbing, gripping and profoundly strange, Gaiman's epic new novel sees him on the road to the heart of America.

Three may keep a secret, if two of them are dead.

People only fight over imaginary things.

How was the funeral?" he asked.

"That shitty, huh? You want to talk about it?"

"Good." Wednesday grinned. "Too much talking these days. Talk talk talk. This country would get along much better if people learned to suffer in silence. You hungry?"

Fiction allows us to slide into these other heads, these other places, and look out through other eyes. And then in the tale we stop before we die, or we die vicariously and unharmed, and in the world beyond the tale we turn the page or close the book, and we resume our lives.

"It's not easy to believe."

"I," she told him, "can believe anything. You have no idea what I can believe."

"I can believe things that are true and I can believe things that aren't true and I can believe things where nobody knows if they're true or not. I can believe in Santa Claus and the Easter Bunny and Marilyn Monroe and the Beatles and Elvis and Mister Ed. Listen — I believe that people are perfectible, that knowledge is infinite, that the world is run by secret banking cartels and is visited by aliens on a regular basis, nice ones that look like wrinkledy lemurs and bad ones who mutilate cattle and want our water and our women. I believe that the future sucks and I believe that the future rocks and I believe that one day White Buffalo Woman is going to come back and kick everyone's ass. I believe that all men are just overgrown boys with deep problems communicating and that the decline in good sex in America is coincident with the decline in drive-in movie theaters from state to state. I believe that all politicians are unprincipled crooks and I still believe that they are better than the alternative. I believe that California is going to sink into the sea when the big one comes, while Florida is going to dissolve into madness and alligators and toxic waste. I believe that antibacterial soap is destroying our resistance to dirt and disease so that one day we'll all be wiped out by the common cold like the Martians in War of the Worlds. I believe that the greatest poets of the last century were Edith Sitwell and Don Marquis, that jade is dried dragon sperm, and that thousands of years ago in a former life I was a one-armed Siberian shaman. I believe that mankind's destiny lies in the stars. I believe that candy really did taste better when I was a kid, that it's aerodynamically impossible for a bumblebee to fly, that light is a wave and a particle, that there's a cat in a box somewhere who's alive and dead at the same time (although if they don't ever open the box to feed it it'll eventually just be two different kinds of dead), and that there are stars in the universe billions of years older than the universe itself. I believe in a personal god who cares about me and worries and oversees everything I do. I believe in an impersonal god who set the universe in motion and went off to hang with her girlfriends and doesn't even know that I'm alive. I believe in an empty and godless universe of causal chaos, background noise, and sheer blind luck. I believe that anyone who says that sex is overrated just hasn't done it properly. I believe that anyone who claims to know what's going on will lie about the little things too. I believe in absolute honesty and sensible social lies. I believe in a woman's right to choose, a baby's right to live, that while all human life is sacred there's nothing wrong with the death penalty if you can trust the legal system implicitly, and that no one but a moron would ever trust the legal system. I believe that life is a game, that life is a cruel joke, and that life is what happens when you're alive and that you might as well lie back and enjoy it."

She stopped, out of breath.

Shadow almost took his hands off the wheel to applaud. Instead he said, "Okay. So if I tell you what I've learned you won't think that I'm a nut."

Then she looked at the man on the tree and she smiled wryly. ”They just aren’t as interesting naked,” she said. ”It’s the unwrapping that’s half the fun. Like with gifts, and eggs.”

That wasn´t the first thing he said to her. The first thing was 'I love you', because it´s a good thing to say if you can mean it, and Shadow did.

"If hell is other people, then airports is purgatory"

The bird turned, head tipped, suspiciously, on one side, and it stared at him with bright eyes.
'Say "Nevermore",' said Shadow.
'Fuck you,' said the raven.

25 of the greatest fantasy books ever written

Books I would recommend to my students

De nominerte i 1982 var:
Little, Big by John Crowley
The Many-Coloured Land by Julian May
Radix by A A Attanasio
Riddley Walker by Russell Hoban