"How the Worlds Most Notorious Atheist Changed His Mind". 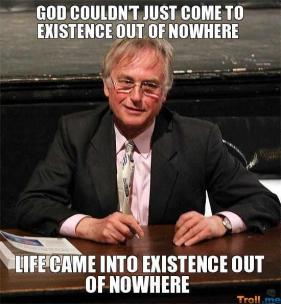 ‘the presumption of atheism is, at best, a methodological starting point,
not an ontological conclusion’ - (Flew)

The fault of Dawkins as an academic .. was his scandalous and apparently
deliberate refusal to present the doctrine
which he appears to think he has refuted, in its strongest form.

Thus we find in his index five references to Einstein.
They are to the mask of Einstein and Einstein on morality;
on a personal God; on the purpose of life (the human situation and on
how man is here for the sake of other men and above all for those on whose
well-being our own happiness depends);
and finally on Einstein’s religious views.

But (I find it hard to write with restraint about this obscurantist refusal
on the part of Dawkins)
he makes no mention of Einstein’s most relevant report: namely, that

the integrated complexity of the world of physics has led E. to believe
that there must be a Divine Intelligence behind it.

(I myself think it obvious that if this argument is applicable to the world
of physics, then it must be hugely more powerful
if it is applied to the immeasurably more complicated world of biology.)

Of course many physicists, with the highest of reputations, do not agree with
Einstein in this matter. But an academic attacking some ideological position
which she believes to be mistaken must of course attack that position
in its strongest form.
This Dawkins does not do in the case of Einstein
and his failure is the crucial index of his insincerity of academic purpose
and therefore warrants me in charging him with having become, what he has
probably believed to be an impossibility, a secularist bigot.

On page 82 of The God Delusion is a remarkable note. It reads ‘We might be
seeing something similar today in the over-publicised tergiversation of
the philosopher Antony Flew, who announced in his old age
that he had been converted to belief in some sort of deity
(triggering a frenzy of eager repetition all around the Internet).’

What is important about this passage is not what Dawkins is saying
about Flew
but what he is showing here about Dawkins.
For if he had had any interest in the truth of the matter of which he was
making so much, he would surely have brought himself to write me a letter
of enquiry.
(When I received a torrent of enquiries after an account of my conversion
to Deism had been published in the quarterly of the Royal Institute of
Philosophy, I managed – I believe – eventually to reply to every letter.)

This whole business makes all too clear that Dawkins is not interested in
the truth as such
but is primarily concerned to discredit an ideological opponent
by any available means.
That would itself constitute sufficient reason for suspecting that
the whole enterprise of The God Delusion was not, as it at least pretended
to be, an attempt to discover and spread knowledge
of the existence or non-existence of God
but rather an attempt – an extremely successful one –
to spread the author’s own convictions in this area.