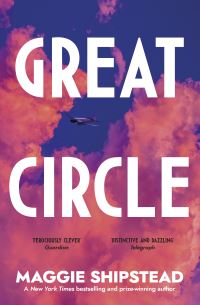 From the night she is rescued as a baby out of the flames of a sinking ship; to the day she joins a pair of daredevil pilots looping and diving over the rugged forests of her childhood, to the thrill of flying Spitfires during the war, the life of Marian Graves has always been marked by a lust for freedom and danger.

In 1950, she embarks on the great circle flight, circumnavigating the globe. It is Marian's life dream and her final journey, before she disappears without a trace.

Half a century later, Hadley Baxter, a brilliant, troubled Hollywood starlet is irresistibly drawn to play Marian Graves, a role that will lead her to probe the deepest mysteries of the vanished pilot's life.

An enthralling journey over oceans and continents and a drama of exhilarating power, GREAT CIRCLE is perfect for book clubs and fans of William Boyd and Donna Tartt.