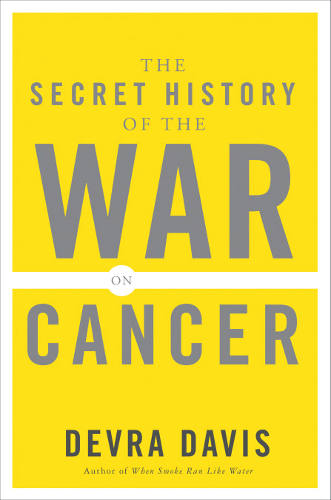 Secret History of the War on Cancer

It's what they don't say that can kill you.

Since the 1930s, scientists have known that what people ate,
or breathed in,
or simply had the misfortune to live or work around - -
could make them sick to death.

Yet to this day, vital research data is being kept under wraps,

while corporations and government agencies (even eminent
cancer-fighting organizations) boast of breathtaking advances
in conquering the disease.

In her devastating, 20-years-in-the-making exposé,
The Secret History of the War on Cancer

Devra Davis , a professor of epidemiology and director of
the Center for Environmental Oncology at the University of
Pittsburgh Cancer Institute,

shows how cancer researchers, bankrolled by petrochemical
and pharmaceutical companies, among others, collude in

"the science of doubt promotion."

They deftly spin results to suggest uncertainty where none
exists, deflect blame, and prioritize treatment —
a source of windfalls for drug manufacturers — over prevention.

Davis diagnoses two of the most lethal diseases of modern
society:
secrecy and self-interest.
This book is a dramatic plea for a cure.
/ kilde /

I got some friendly advice from a man who was.. running the
National Institutes of Health.
He called me into his spacious office ....

"This work you've been publishing on cancer patterns is
pretty interesting. You know, I started out my career
interested in the environment and cancer.
I'm pretty sure that some of the lung cancer we see in women
in southwestern Pennsylvania, where you come from, has
something to do with the environment.
I actually tried to do a study on that when I started out
doing research, but I decided against it."
"What made you change your mind?" I asked.

He leaned back in his chair and put his hands atop the back
of his head, rocking in thought.
"You ever hear of Wilhelm Hueper?"
I shook my head.

"Hueper started out like you.
Lots of good ideas about the environment. He thought the
exclusive focus on smoking would lead us away from other
causes of cancer that were far more deadly.

He was railroaded out of here. He wasn't the easiest fellow
to work with and rubbed lots of people the wrong way,
but not necessarily for the wrong reasons.
I decided after seeing what happened to him that I was better
off sticking to basic research.
Somebody like you should think about that."
I did. I stayed with NAS for a decade, . . .