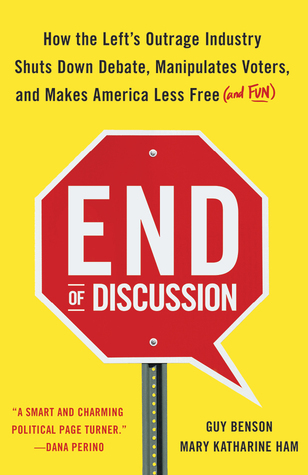 "argue that the other side should not argue."

[the authors] expose how the Left exploits fake outrage
to silence their political opponents — in public, on social media,
at work, and even in homes.
You’ve felt it - and “End of Discussion” can help you fight it.

The political correctness born on college campuses has mutated into
a new hypersensitivity. It’s weaponized in Washington, D.C.
by a network of well-trained operatives, media, and politicians,
and proliferated throughout the country.
The new Puritans of the Left are quick to ban comedians and
commencement speakers alike for the sin of disagreeing with them.
They demand “safe spaces”
while making dissent increasingly dangerous for Americans.
( Goodreads )

The object is no longer to argue one’s own side of any issue
passionately, but to argue that the other side should not argue.”
( bokklubben )

..trying to convince half the country to shut up
is not the same as actually convincing them.
And yet, in its wake, the impulse to stifle and punish "incorrect"
viewpoints, and the "deplorables" who voice them, is alive and well.
It's a vicious and ironic cycle, especially in academia, where
dissenting speech is deemed dangerous and equated to violence --
while actual violence is justified to bully its proponents.

.. brilliant exposé of the left’s outrageous outrage over everything!
Free speech isn’t free. It must be fought for.

"Free speech isn't always pretty, but it's vital to the American way.
We have to make America talk again.
End of Discussion arms readers to find their voices and fight back
against the death of debate."